Generally, when I see a problem that has 3 solves and is worth 500 points with a day left in the competition, I stay away. This time, however, my teammate hgarrereyn said something that stuck with me: "honestly some of these chals are really easy people just don't try them". It holds a lot of truth, because that same logic would have applied to me. It's a ginormous pcap file that seems really complicated, with little solves. Nonetheless, he inspired me to give it a shot and I'm really glad he did.

Upon opening Wireshark and inspecting the first few packets, you can see some plain text: "TSource Engine Query". After googling, we found this page on Valve server queries. Cool! We get to reverse engineer Valve's server network structures. However, these are just standard queries for finding game servers, so likely the player was viewing a list of servers at this time. Moving forward, at some point we can see a bunch of HTTP requests for sound files, such as "GET /sound/admin_plugin/bestman.wav". If you've ever played a source game like Counter Strike: Source or TF2, you would know that when joining a custom server, you often download a bunch of sound files. 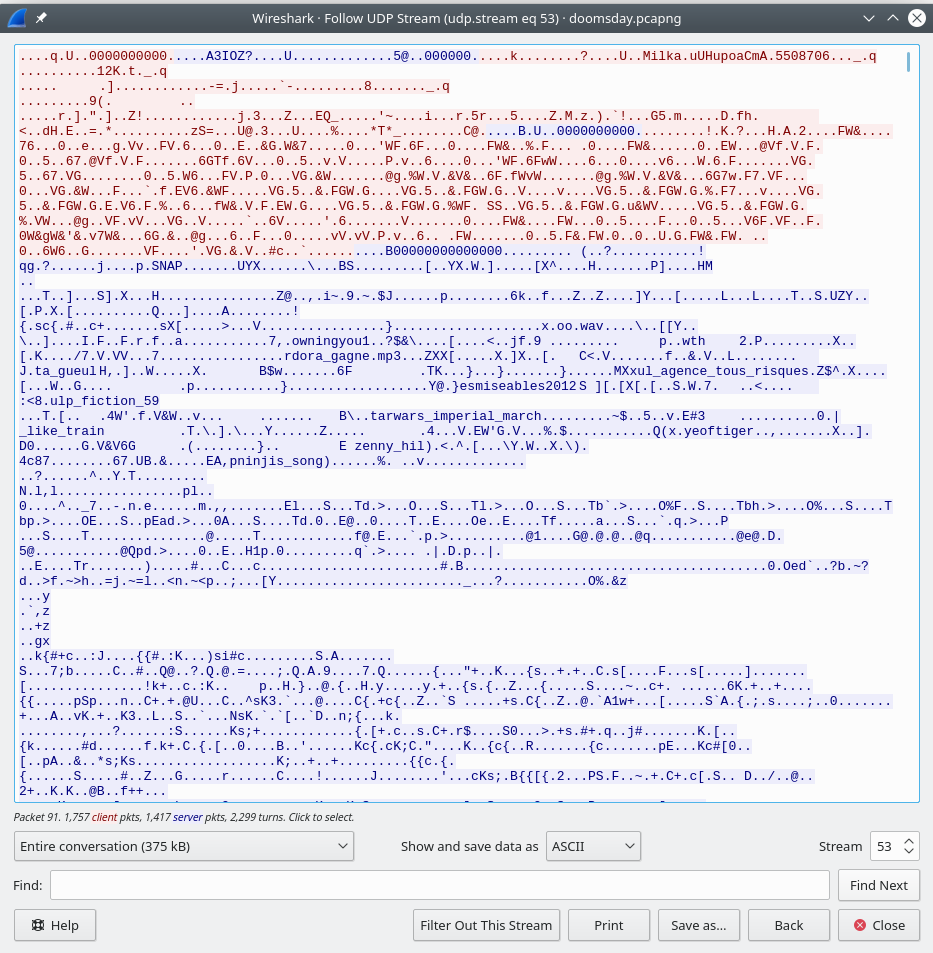 So of course I tried some really cheesy stuff, like using strings to find "XX--MM...". No luck. At this point, I thought my next step would be to try to find documentation on how the game servers communicate, and filter out packages that have chat in them. I did a lot of research, but found little to no specifications. Then, I had a brilliant idea. Why don't I capture my own packets, go into TF2, join an empty server, and check out how they look?

So I did exactly that. I loaded up TF2 and set it into windowed mode with low resolution so I could have it side by side with Wireshark. At the time, I also had Discord and my internet browser running, so Wireshark was filled with those packets. Once I found a suitable server, I used a filter to only show packets to and from them: udp.port == 27223 . Still, when in the game, I am constantly receiving updates on the game state. I discovered that most basic game state updates were less than 100 bytes, so I added another filter udp.length > 100.

I typed the letter A into the server as much as I could, and I saw that I sent this packet to the server:

Based on the wording of the problem, I believe that the client himself is not sending messages, but rather he is receiving them. So more importantly, what do I get back from the server when I type a bunch of A's?

So now we know why using strings doesn't work: everything is bitshifted. From here, I had two routes. The first route was to try to understand the header bytes of a chat message, then search for those in the original pcap. Or, the "big brain" stupid yet genius idea I had, was to convert the entire conversation to literal binary (1's and 0's), and search for "XX--MMAA...". This is not something that I am particularly proud of, but it actually worked.

First, extract the conversation with tshark: tshark -r doomsday.pcapng -T fields -e "data" -R "udp.stream eq 53 and ip.src eq 212.83.129.138" -2 > tmp.out. This command filters out the specific udp stream, specifically the data section of each packet, and only what the server sends to the client (we don't care what the client sends). It create's a file named tmp.out that has each packet's data section literally written out in hexadecimal. I wrote a simple Python script to make a new file that literally had the bits written out as 1's and 0's.

Next, I wrote a script so bad that I won't even paste it, but essentially it searches for the binary codes of the letters XX--MMAAA (note that in the challenge description, it says every letter is doubled). This actually didn't find anything, so I thought maybe the message was split up into sections. I tried searching for just MMAASS and I got it! I traced it back to packet 23867, which consisted of this:

Interesting, you can see a lot of double bytes, indicating that this is probably a message! I pasted it into my base converter, added seven 0's to the front, deleted all the unimportant characters, and I got this: YY-MMAASS{{00uu''ss__ff55mm33^^oo11ffhhuu^^tt00oo11ffhhuu______||. That's.. the flag? Why does it start with "YY" and not end in "}}"?

Unfortunately, I spent hours looking elsewhere until I realized something very stupid. A lot of those characters are just... off by one. That's all. Y is one more than X, | is one less than }. At this point, my beloved teammate poortho played a quick guessing game, randomly increasing or decreasing each letter by one until it made sense. At the end of it all, he submitted the flag X-MAS{1t's_g4m3_n1ght_t0n1ght___}.